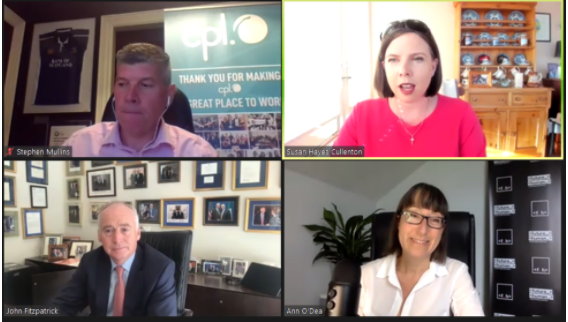 The IIBN autumnal calendar started off with a fantastic interview between two people that we all know very well. Ann O’Dea is co-founder of Silicon Republic as well as the founder of FutureHuman, which is the world’s first major Hybrid tech event taking place at the end of October. Fitzpatricks has been a home away from home for the Irish in New York for almost thirty years. In fact, many of the international attendees at the New York IIBN conference in 2014 stayed at Fitzpatricks (including myself!). The live interview truly felt like we were all in John’s office as Ann expertly led us through his career.

Ann took John back to the very beginning and asked him to share his earliest experience of hospitality in the Big Apple. At the very beginning, John opened an Irish hotel without a license (but that soon changed!). During the first six months, none of the corporates knew of the brand so the sales team really had to “pound the pavement”. In fact, John installed cameras all over the premises, not for mega surveillance but so he could quickly spot any customers and go and talk to them. Fitzpatricks pride themselves on personal service. John said “Once we got them in the door, we knew we could take care of them as opposed to the “bums in beds” approach by others in the industry.”

John punctuated the interview with his father’s advice. He strongly believed that “it doesn’t matter how many hotels you have, you’re still an innkeeper”. His Dad also Insisted that you have to circulate and talk to people in the hotel and you can’t ask somebody to do something that you wouldn’t do yourself. However, John candidly reflected that his Dad wouldn’t be the success he was without John’s Mam.

Ann brought a lot of research to the discussion and asked John about the “sitting lobby”. He pointed out that as you’re travelling, you’re always lining up – to check-in, to board, to get your luggage and get a taxi. The last thing you want to do is line up again. The sitting lobby at Fitzpatricks invites people to relax and is all part of the personal service.

Mary Robinson was the first celebrity guest and then Albert Reynolds was Taoiseach stayed too. Dr Michael Smurfit said to John “I will send my staff there to stay with you one time but after that, they will only go if they want to!” John was emphatic that you can’t just lean on Irish support and expect them to return to you just because of that. He reiterates again and again that you have to take care of people. Joan Collins popped in one Sunday and he ended up cooking her Christmas dinner during the festive season! Liam Neeson has been a visitor and Kitty, Liam’s Mum, sometimes comes over to sit in the lobby. He also knows Meghan Markle as a friend who he took to the White House after she took on the Ice Bucket Challenge with Rory McIlroy.

Ann asked John to give us a window into New York’s history through John’s eyes. The impact of 9/11 was different because the rest of the world rallied around New York. Lots of people wanted to come and see Ground Zero. The difference now is that “we’re all in it and nobody wants to be in the same room as another person”. John highlights the need for positivity because that’s what a business vision needs in order to take on the challenges and opportunities presented.

In brief, John says that a hotel needs to have 55%/60% occupancy to survive but 80%/ 85% to make it. He draws a stark contrast between the hotels in New York which hasn’t had financial help and his sister’s hotel in Dublin that could use the Employee Wage Subsidy Scheme.

If one didn’t recognise John Fitzpatrick’s name from the hospitality realm, you may remember him from “The Secret Millionaire”. Personally, I remember it seeing it and distinctly remember that he added money from his own Foundation to the pot allocated by the show. That Foundation, to date, has raised over $5 million.  He recounts that the first event they ran brought $10,000 to the table … while the most recent one was responsible for $450,000. “We do one event and we do it well” muses John.

As Ann invited John to walk down Memory Lane, through 9/11, recessions, changes in technology and lots more besides, John smiles through his stories of adventure, intrigue, and lots of charming tenacity. It seems clear that the further John has advanced through his career that started as a little boy soaking up the hospitality habits of his parents right up to the present day, his skill and resolve are only getting stronger.