During our Facebook Live video today, I took our viewers on a whistle-stop tour of the Irish housing market.

In 2020, the government expects to spend €2.56 billion on housing and this is more than double the amount spent during the year of our IMF bailout when €1.08 billion was spent in the same area. It’s super easy to find these figures using the “Where your Money Goes” web site. One can navigate it easily by clicking on the sector where you want detail. 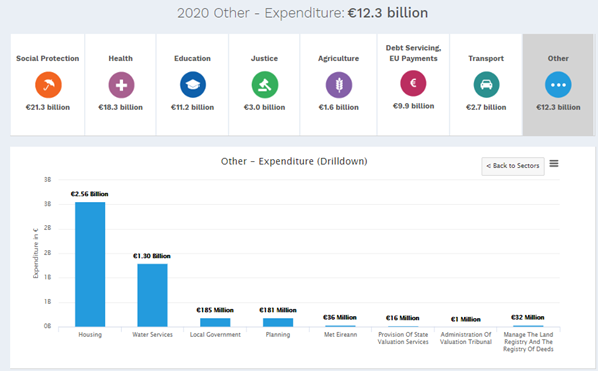 The housing issue today is one of the most serious of our time and generates a lot of public conversation. It’s important to consider what the real issues are and what’s driving them. Let’s begin with supply, followed by demand and how the market is interacting via price.

Many commentators today have been pointing out that this housing crisis is since we simply haven’t been building enough places for people to live and hence, the issue is with supply. According to the 2019 Q4 Daft.ie report, “there were a total of nearly 69,000 properties listed for sale during 2019, up from 52,000 in 2016 and just 33,000 in 2012.” In addition, according to the BPFI Housing Monitor Q3 2019 “Almost 5,700 new dwellings were completed according to the Central Statistics Office (CSO)* in Q3 2019, 22% more than in Q3 2018. Completions in Dublin rose by only 3.1% year-on-year while they fell by 1.1% in Cork. While the other regions reported strong year-on-year growth, the Dublin Commuter region accounted for 432 of the 829 additional housing units completed.”

These two statistics tell us that there are more houses available for sale and that there is more activity in the places where the greater part of the population want to live due to employment etc. However, that doesn’t fully address our point regarding supply. We also need to consider if the housing that is being built is suitable for those who are looking for them.

For this reason, we must also look to the rental market. After all, according to the same report, one in three households in the country live in rented accommodation and hence, it’s a primary use of households.

The daft.ie Rental Report On November 1st 2019, there were 3500 homes available to rent nationwide. This figure is 10% higher than the same date last year. This is the first November in the full decade when supply has increased. This trend is exactly mirrored in Dublin were in August, there were 1,541 properties available to rent which is 10% more than the same date a year previously.

The other key point regarding the supply of housing is not just where they’re located or what they’re used for but also affordability. Further again, affordability is linked to size requirements. If there are an abundance of five-bedroom houses available to rent for a couple, then a mismatch is likely. Two people aren’t going to want (or perhaps be able) to rent a large house when just two people are looking for a new temporary home. Similarly, a family with two parents and four children aren’t going to want to buy a one-bedroom apartment.

The daft.ie rental report illustrates the range of rental prices in our cities and counties while the price report highlights that the average national house price is over a quarter of a million with 70%of new homes sold were in the greater Dublin area. 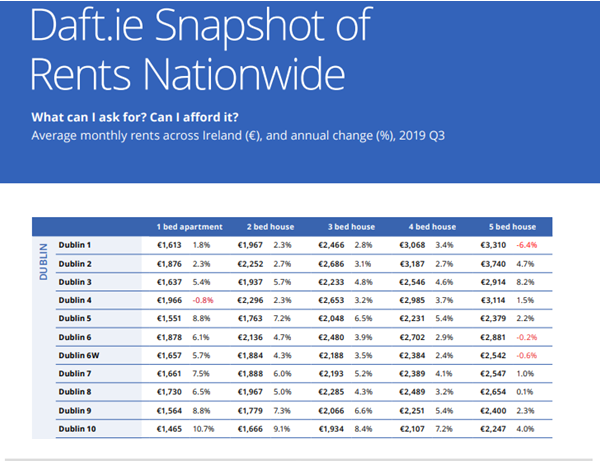 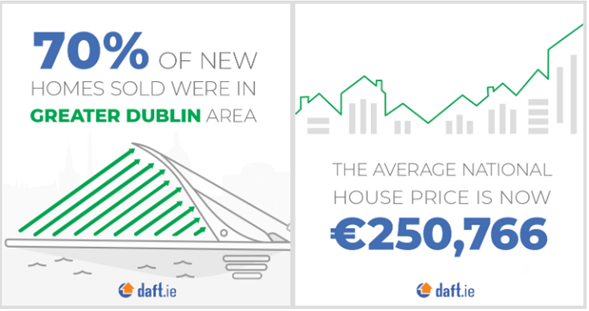 Therefore, the issues are clear. There is enough suitable housing for people in the areas that they want to live, in an appropriate size at a cost that’s affordable, particularly to rent.

While it takes time to increase the supply of housing, there has been a range of suggestions put forward by a variety of economists over the years including:

However, we must also consider changing the attractiveness of where people live. For example:

Demand for housing is driven from a variety of sources in the economy.

In November 2019, €980 million was approved for 4,182 mortgages. That is an increase of 7.2% in the value approved in comparison to the same month last year. While this is a noteworthy figure, it’s important to mention that an approval doesn’t equal drawdown. A person or couple or other combination can only draw down the mortgage if they have found and reached agreement on the property. In other words, approval is predicated on the availability of a property in the first place. 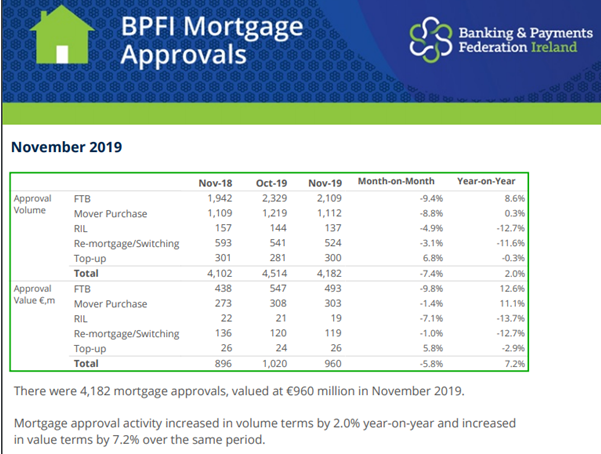 The more people there are in an area who are in paid employment, the higher the likelihood that they will need housing in the local area and that they will have more money to pay for it. Therefore, the local job market has a direct effect on the local house price and the rental market too. As per the below image from the Department Business, Enterprise and Innovation, Dublin has the lowest unemployment rate in the country. Conversely, it has the highest employment rate in the country and hence, is likely to have higher demand. 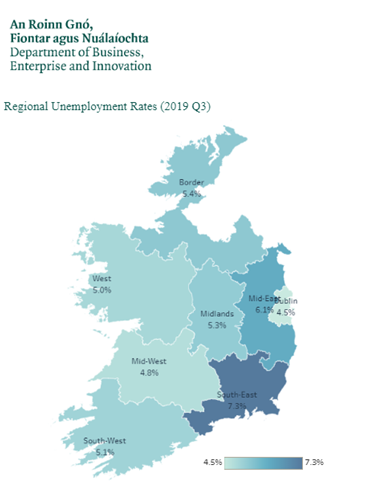 As people earn more, they can afford to spend more on their accommodation. The broad lending rule is that a mortgage applicant can apply for 3.5 times their gross salary (with some other terms and conditions). Therefore, the more they earn, the more they can borrow and the more they can potentially pay for a house. The same DEBI Dashboard shows the rise of the average wage in Ireland. Since 2001, real (inflation-adjusted) average weekly earnings have been increasing in Ireland (except for 2009 – 2014) and hence this increased demand pushes house prices up further. 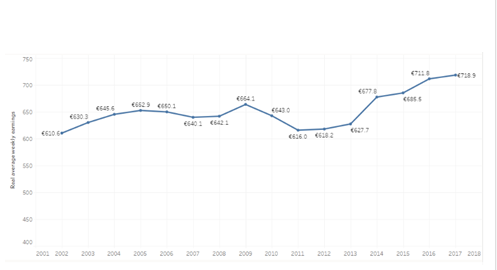 What are the consequences of the above? 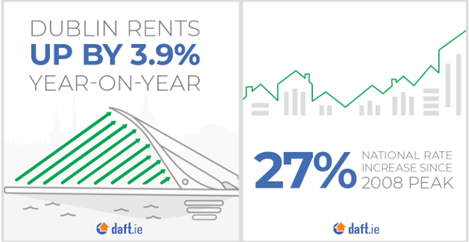 daft.ie House Price Report: Q4 2019 – An infographic by the team at daft.ie

While there are a range of supports available for people who find it difficult to repay their mortgage, there are many people in Irish society today for whom it’s just too much and they find themselves homeless. In November, as per the below table, there were 6696 adults who sought managed emergency accommodation with most of those aged between 25 – 44. 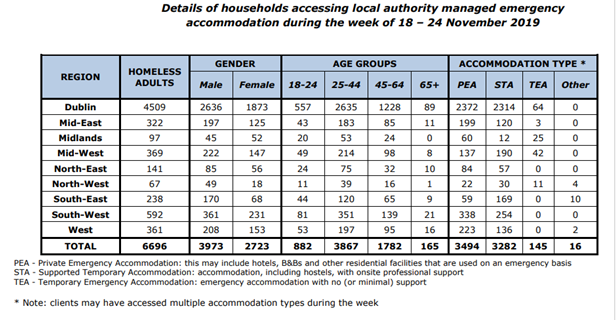 In summary, it’s important for people interested in economics to truly understand where the real issues lie in one of the most serious issues facing the country today. It’s going to be debated at length during the upcoming general election, will influence government expenditure for years to come and is one of the most fundamental needs of our current and future generations.

Join us on Wednesday 19th February 2020 for our next FaceBook Live at 7pm.
“Positive Economics – Spotlight on International Trade”