What is quantitative easing, and what problem does it solve? Is it ever possible to create "free money"? 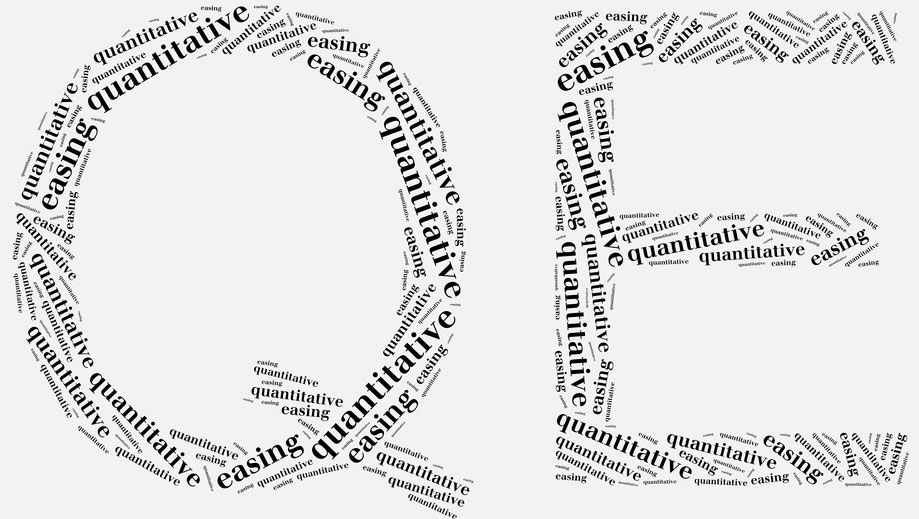 Quantitative easing is a “monetary policy” measure. It is used by central banks in an attempt to stimulate the economy, more precisely to kickstart growth in times of economic sluggishness. But it’s not a panacea and should be used with caution…

Sean Moncrieff interviewed me about just this topic for his Newstalk show: you can listen to the interview here (opens in new window; or right-click to “save as”)

How does it work?

A central bank is the institution that manages the monetary policy decisions of a country: it controls interest rates, manages the money supply, modifies the exchange rate, regulates the banking sector and puts supranational (e.g. European) regulation into national action, among many other tasks.

The rationale is that this will have a trickle-down effect:

So far, so good. But quantitative easing is a game of two halves. And it can only solve the problems that it can solve…

What quantitative easing can do

Of course the micro effects on your own wallet and wages might take a while to make themselves felt, but the central bank chooses this indirect route… That’s one of the reasons why, in economics, you shouldn’t confuse the micro economics of your immediate environment and the macro economics of national statistics and indicators like GDP.

By stimulating the economy with quantitative easing, a central bank is trying to influence GDP and kickstart economic recovery.

The side effects of quantitative easing

But there is a problem: as always, something is valuable in proportion to its scarcity. If you pump money into the economy like this, and the amount of goods and services remain the same, then the price of those goods will rise – quantitative easing creates inflation.

For example, let’s say that five people are in a room who want to buy a laptop and I auction it off to the highest bidder for €300. Now, they’re all given an extra €200 each and we hold the same auction. It’s quite likely that the final price of that one laptop would rise as the motivated buyers all have more money.

Now controlling inflation is also part of a central bank’s mandate. A small amount of inflation is taken to be part of a healthy economy, so the ECB for example has a mandate to keep inflation at or below 2%. After all, if you can sell goods and services for a higher price, you are making more money, which allows you in turn to spend more and contribute to the economy.

But when inflation is too high, businesses end up not being able to afford necessities like supplies, rent and employees, and it’s the same for individuals – if you’ve ever talked about the rising cost of petrol, you know what inflation is and how it adversely affects your buying power.

Quantitative easing is still an effective policy: even the German Central Bank has now agreed that it would consider it as an option to reinvigorate the European economy, if the bloc doesn’t see sufficient economic growth and inflation in the coming months.

Quantitative easing has the potential to backfire

Quantitative easing is partly a gamble: by increasing the money supply, the central bank hopes that the money will move through the economy fast enough and with enough impact. But the central bank cannot force the commercial banks nor individuals to do anything specific with that money.

Let’s go back to our original example: if the central bank buys back government bonds, the people and companies who sell those bonds might not use the money to spend in the economy. They might simply decide to put it in savings accounts or buy other bonds. But for it to have any real impact, the money needs to make its way into the real economy. If it’s locked in securities again, the supply of new money won’t trickle down into the economy.

You also have to contend with the highly addictive power of cheap money… The markets have reacted very well to the news of quantitative easing. But for the reasons outlined above (inflation and the money not being used in the way it was meant to be used), quantitative easing has to be stopped at some point. Also, if money was printed indefinitely, it would simply lose its value. Why would anybody work if they knew that they simply need to buy bonds or other securities, and if they think that these are guaranteed to rise significantly each and every month, thanks to the central bank.

Stop! How do we get off the QE train?

The problem with quantitative easing is that once you start, it’s difficult to stop. So are we doomed to a runaway train of hyperinflation and no visible effect in the wider economy? Not exactly.

As Rory Gillen says, “Markets are discounting mechanisms.” If you tell the markets well in advance that something is going to happen, they will factor it into their calculations, so that, by the time it finally happens, they’ve adapted to the news – and their reaction is tamer than expected.

In the last few months, every time a minister has been announcing the end of QE, the markets have reacted badly, but by the time the governments actually put these words into action, the markets have taken it in their stride.

In fact, Janet Yellen (the Chair of the Fed) has announced that interest rate increases may happen “as early” as this time next year so that the markets can assimilate the information long before the actual rate change happens.

[button link=”http://www.thepositiveeconomist.com/subscribe/” icon=”&#128248;” target=”” color=”e60000″ textcolor=”ffffff”]Sign Up For Our Monthly Newsletter: And get more content like this, learn about business opportunities, and never miss our Savvy podcast [/button]